Built in 1926, Historic Bethel Baptist Church, Collegeville, became the epicenter for a non-violent protest movement that swept across the United States and around the world.  Under the leadership of Rev. Fred L. Shuttlesworth, Bethel became the official launching pad of the Modern Civil Rights Movement in Birmingham, Alabama. 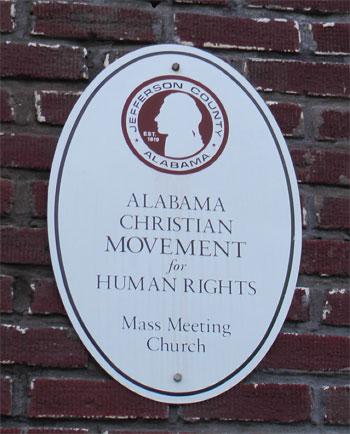 Bethel was the headquarters for the Alabama Christian Movement for Human Rights (ACMHR) which was established in 1956, after the state of Alabama outlawed the NAACP and declared it a foreign corporation. The State of Alabama took this step because Rev. Shuttlesworth refused to give the names of its members to the Alabama Attorney General.  The ACMHR applied both legal and nonviolent direct action against segregation.

The protest movement that Rev. Shuttlesworth launched from Bethel, attacked segregation in all its forms as he and the ACMHR sought for all citizens the right to vote, attend schools supported with taxpayer dollars, seek community improvements, utilize public accommodations, seek equal employment opportunities, justice in the courtrooms, and the right to sit in any open seat on city buses.  Because of Rev. Shuttlesworth, the impact of the victory over segregation in Birmingham inspired people across the nation and around the world.

Bethel Baptist was also a key location during the 1961 Freedom Rides and was the designated point of contact for the group in Alabama. Rev. Shuttlesworth worked with other movement leaders and the Kennedy administration to strategize moving the rides forward.

The church and its parsonage were bombed three times during the height of the Civil Rights Movement, including Christmas Day, 1956.

On April 5, 2005, Historic Bethel was recognized as a National Historic Landmark.  In 2009, Bethel was nominated by the National Park Service to UNESCO for recognition as a World Heritage Site.